Kiteboarding in Barbados is just great!

With warm water and climate all year round and Trade Winds that blow constantly most of the year, It’s a kiter’s dream.

I’ve been kiteboarding in Barbados twice and it’s definitely up there on my list of places I’d go to again. There are a lot of reasons it’s one of the most popular islands in the Caribbean, with a great mix of cool vibe, warm climate and great winds.

Situated on the southernmost rim of the Caribbean and with one side facing out to the Atlantic, Barbados is one of the windiest islands in The Caribbean.

And with it’s friendly and welcoming atmosphere, abundance of golden sandy beaches, and restaurants of every sort, there’s something for everyone.

And don’t miss the Friday night “Fish Fry” at Oistins. It’s like a carnival, every week. But then the Bajans love to party.

The main kiteboarding areas are on the southeast end of the island, between Oistins and the airport.

This is where the trade winds and Atlantic swells blow in, but head a few miles up the West coast and the water is calmer and the winds lighter.

The West coast is where most of the main towns and holiday resorts are situated, including St Lawrence Gap, Hastings and the capital, Bridgetown.

The East coast is more rugged and good for surfing but not great for kiteboarding as most of the beaches are very rocky. But well worth a look for the stunning scenery.

The best time to go for kiteboarding is beginning of November to end of June. In July to October the winds tend to be lighter and it’s the rainy season. It’s also when it’s hottest so humidity is high.

That said, the daytime air temperature rarely varies from the range 27 to 30C. And the water temperature never varies outside 26 to 29C, so forget the wetsuit!

The prevailing winds in Barbados are the Trade Winds that blow from the East varying slightly between NE to SE during the windy season.

Generally the wind starts around 8am and tends to drop in the afternoon after about 12.30.

And it varies between 15-22kts generally, although will sometimes get up to 25kts.

In all the kite beaches the prevailing wind is cross-onshore from the left but can vary to more on-shore depending on its variation between NE and SE and depending on the location.

Maxwell Beach on the West coast is also popular but tends to attract more non-kiting holidaymakers so you’ll be sharing it with sunbathers.

None of the kiting beaches have formal rescue services, but the kite schools and fellow kiters tend to keep an eye out for anyone in difficulty. As the winds are generally onshore or cross-onshore you’ll usually wash up ashore at some point if you get in trouble! 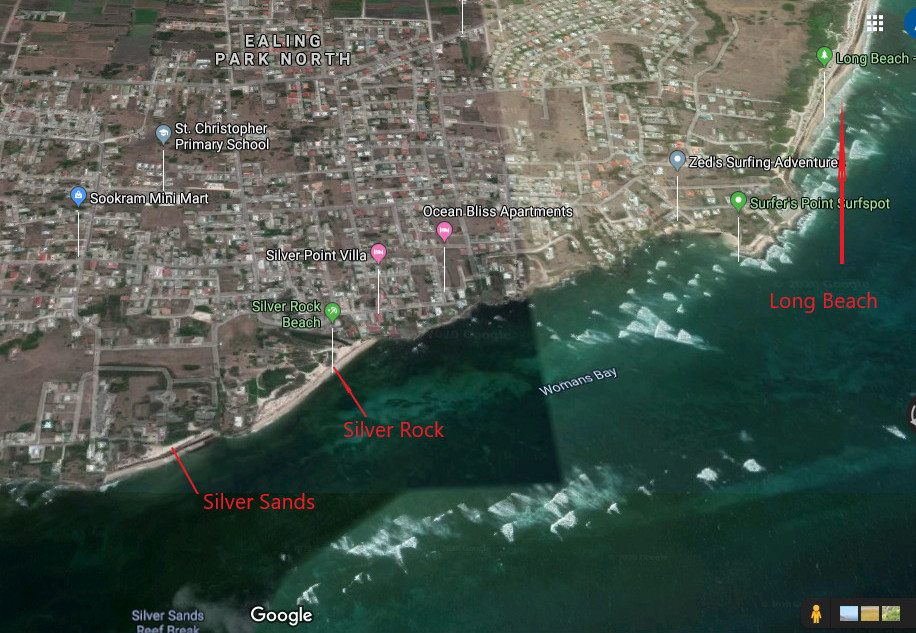 The main kiteboarding beach, in the area of Christ Church near the small but bustling town of Oistins.

It’s a little bit difficult to find from the main coast road, but head into the small township of Christ Church and just keep heading coastwards down the little lanes between the pretty pastel coloured “chattel houses” and you’ll find it.

This is where most of the kite schools are. Silver Rock Beach faces pretty much South East and, whilst not massive in length, about 500 metres there’s a reasonable amount of space to launch and land. 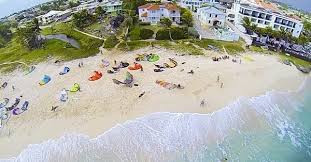 There can be a bit of shore-break at high tide that’s a bit challenging for a beginner to get out through, but if you pick your spot for entering the water it’s okay.

This tends to be worse when the wind’s directly on-shore.

The reef is about 600 metres out and is enough below the surface at low tide that you won’t hit it, but it’s pretty sharp if you try and stand on it!

The bottom is pretty much sandy all the way inside the reef.

Inside the reef it can be a bit choppy and there’s a lovely breaking wave over the reef if you fancy practicing your wave-riding skills. But overall the water inside the reef is pretty much beginner friendly, once you’ve mastered the basics.

The first time I went I was a relative beginner and I had no problem.

Silver Sands is directly next to Silver Rock Beach, going west and the two are separated by a small rocky headland.

It’s smaller in length than Silver Rock, about 300 metres and the beach is narrower so a bit of care is needed at high tide when you’re launching and landing. But this bit of beach tends to be quieter than it’s neighbour.

Both times I stayed at the Silver Sands Hotel, two steps from the beach. But unfortunately it closed down some years ago and is now empty.

When the wind blows from the North East or East the water inside the reef is a bit flatter than at Silver Rock but the shore-break is pretty big if it’s on-shore i.e from the South East.

If you’re a beginner it’s a bit more challenging than Silver Rock because of the relatively small beach, and if you end up being carried down-wind the next beach is Miami Beach (not the one in Florida!) – a 3km walk of shame to get back on the coast road!

But if you’re okay with kiting upwind it’s a good option if Silver Rock seems a bit crowded.

Again, a bit difficult to find from the road but head out of Oistins on the coast road towards the airport and look for a lane off to the right – well worth it!

As its name suggests this is the longest beach on the island, about 2kms long with a headland and rocks at each end.

There’s always plenty of room for the few kiters who head there and good for beginners. Just make sure you launch at the far right end so you’ve got plenty of room down-wind.

The beach is right at the end of the airport runway but there are only a few flights in and out each day so not a problem. 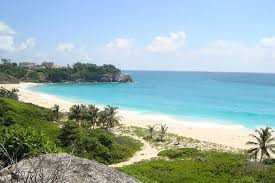 This is a kilometre long stretch of sandy beach just before you get to St Lawrence Gap coming from Oistins.

Because it faces South the wind is mostly cross-shore here or slightly cross-onshore. The water tends to be a lot flatter than the other kiting beaches and hardly any shore-break, so great for beginners.

The main reason it’s not used by more kiters is that it can be a bit busier with “normal” people. But get there early and it’s ideal.

There’s plenty of self-catering apartments and reasonably priced hotels all over the island, but if you want to be within walking distance of Silver Rock and Silver Sands then it’s got to be either Silver Point Hotel at the Westernmost end of Silver Rock Beach.

A more laid-back alternative is the Moonraker BeachHotel (which is actually apartments and studios) with the ubercool and laid back Surfers Bay Beach Bar and Restaurant right in front of it. 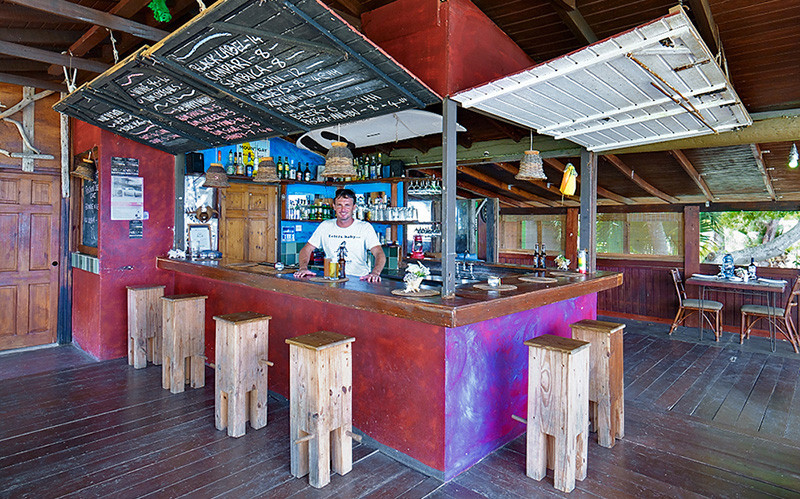 Moonraker is at the other end of the two beaches 200 metres to the West of Silver Sands on it’s own tiny cove.

When I stayed at the now closed Silver Sands Hotel we headed straight here every day and it’s still run by Steve Campbell, the first guy I saw kitesurfing way back at the start of the sport! 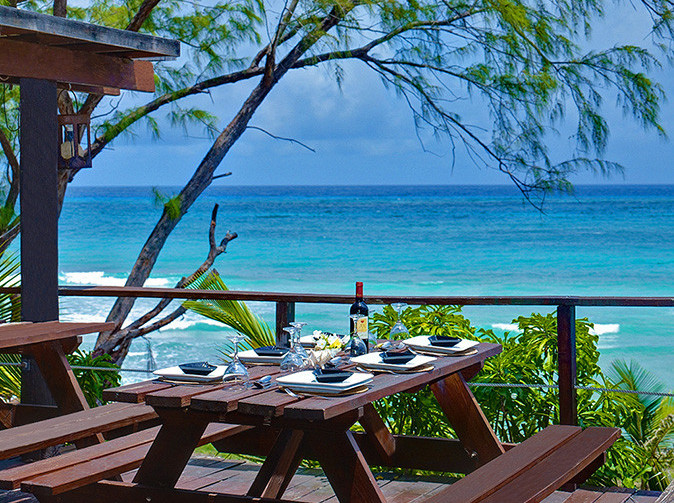 I’ve found the best deals, whether for self-catering or hotels are generally on Hotels.com

If you’re staying at either of the accommodations I’ve mentioned you’re right on the kiting beaches.

But it’s worth hiring a car to get out and see the rest of the island or to get to Long Beach. The driving in Barbados is pretty friendly although traffic on the coast road going up the West coast can be busy.

It’s worth experiencing the “Reggae Buses” which go all round the island and cost very little to use. And there are plenty of taxis.

Silver Rock and Silver Sands are 15 minutes from the only airport, Grantley Adams.

Tell us about it!

If you have your own experience of kiteboarding in Barbados or have any questions, please leave them in the comments box below or email me at adrian@kitemadworld.com. We’d love to hear from you!

We noticed you're visiting from Canada. We've updated our prices to Canadian dollar for your shopping convenience. Use Pound sterling instead. Dismiss