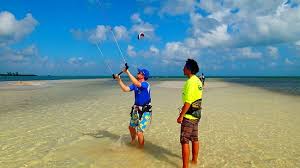 If you’ve already seen kite boarders in action a lot of this will be obvious, but if you’ve only seen them at a distance, as I did the first time, it’ll give you enough of an insight to hopefully want to find out more and have a go.

Kiteboarding for beginners can be a bit mystifying and I often get asked what kitesurfing or kiteboarding is by people when I tell them what I do. So here I’ll describe the basics of what it is, how it evolved, and some of the different disciplines within the sport currently.

Many of us still call it “kitesurfing”, probably because the early pioneers of the sport mainly came from the windsurfing and surfing community on the West coast of France and the Hawaiian Islands.

However, “kiteboarding” is really a more accurate description of the sport, as you don’t need surf, it can be done on flat water, waves, snow, or on a land board.

But the essential ingredients are a large steerable kite, which is steered by the rider to generate forward or upward pull, and a board, which the rider stands on or is attached to.

Sounds pretty out of control?

Well it was in the early days, but it very quickly developed so that the kite can now be accurately steered and powered or de-powered by the rider, using the control bar, which steers and powers the kite by pulling left or right or backwards and forwards. A lot more of this is covered in more detail in other posts though.

The rider is normally (although not always) attached to the power lines of the kite via a harness worn round the waist. This takes most of the strain away from the rider’s arms, directing the pull of the kite down through the rider’s body to the board to create the forward or upward movement that looks (and feels) so impressive.

A Brief History of Kiteboarding

In the late 1970s two brothers, Bruno and Dominique Legaignoux, based on the Atlantic coast of France, began experimenting with kites as a means of propelling riders on surf-type boards.

In 1984 they patented the first kite with an inflatable leading edge to help keep its shape and to aid relaunching the kite from the water. They have continued to be involved in the development of the sport through their brand Wipika.

At the same time developers in the USA were experimenting with kites to pull a rider in a 3 wheel buggy.

The sport really started to develop in the late 1990s when it was embraced by professional windsurfers including Laird Hamilton and Robby Naish, from the windsurfing scene on Maui in the Hawaiian Islands.

These guys were really risking life and limb with out of control kites and none of the safety systems modern kites have, and I believe we owe them a real debt of gratitude for pushing the boundaries to create a sport we can all now enjoy.

At the same time, Bruno Legaignoux in France started marketing the first kite which has been the basis of most kite designs today, with a structure of inflated leading edge and struts and a bridle system of lines to control the shape and performance of the kite.

By 1998 the sport was starting to become available to the adventurous watersports enthusiast, and the first competitions were being held in Maui.

Early depower and safety release systems were starting to make kiteboarding less of a “hang on and hope for the best” affair!

And it was probably these innovations that helped kiteboarding to start becoming more mainstream and accessible to people like myself who had a day job and couldn’t afford weeks off work with broken or dislocated limbs!

That said, it can still be considered an “extreme” sport, although how extreme is very much in the hands of the rider.

There have always been a range of “disciplines”, although that’s probably not a great word for something with so few boundaries! I’ll mention a few here, although this site is aimed mainly at the water-based varieties of kiting:

Wave Riding – As the title implies, this is the art of using the kite to propel the rider (and ideally his or her board too) out to the back of waves so that they can then ride the waves surfer-style.

It tends to involve a larger board that looks very similar to a traditional surf board, although smaller.

The kites used tend to be smaller than for other disciplines so that the rider can lose some of the power when he or she catches the wave and then powers up again to ride back over the wave and catch it again, or cruise around looking for the next one.

The larger board allows for a smaller kite as it is more buoyant and starts moving sooner than a smaller board. This relationship between board and kite size is pretty common throughout the different styles of kite boarding. Wave boards can be used with or without foot straps. 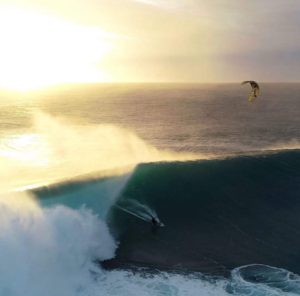 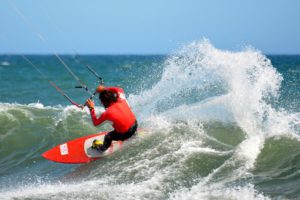 Twin-tip kiting – This is probably the most common type of kiteboarding today, although there are various styles and it also depends on location.

Areas that have predominantly good wave conditions will see a larger proportion of wave-riders.

A twin tip board is generally symmetrical and roughly rectangular in shape. It has straps or “bindings” (more on this in other posts) which keep the rider’s feet attached to the board.

These boards can be ridden in either direction, so the rider doesn’t have to move their feet around to go the opposite way.

There is a wide variety of different twin-tip designs with different lengths, widths, profile and “rocker” shapes (whether the board is flat or curves upwards slightly at the ends). Stiffness and/or flex also provide different performance characteristics.

There are a range of different twin-tip riding styles:

Free Riding – Pretty much as it implies, this involves a combination of different riding styles, from cruising around on flat water to catching waves, jumping and performing tricks, both on the water and in the air.

This is probably the style that could describe most recreational kiters, although often we’ll vary our style (and kit) depending on the location, conditions or the mood that takes us. 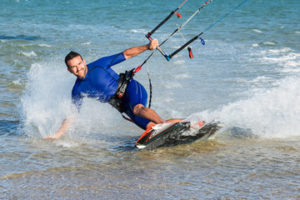 Wake-style – Adopts many of the skills from wakeboarding, where a boat or overhead line is used to pull the rider, except that the boat is replaced by a kite.

Boards tend to be smaller and the riders feet will be attached firmly to the board with bindings or fixed boots.

The emphasis is on fast, explosive low aerial tricks carried out on flat water. In recent years fixed obstacles, rails and ramps (“kickers”), have been introduced to spice up this style of riding. 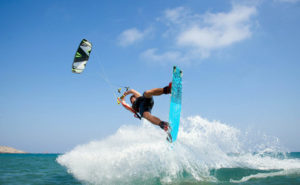 Big air – Does this need me to explain!?

It’s all about big, bigger, and massive jumps. Height reached, distance covered and time in the air.

This style was sort of sidelined for a while and considered “old school” by the new kids on the block (am I showing my age and bias here?), but has had a resurgence with the development of electronic measuring devices that allow the rider to post their achievements on-line and share them with their wider kiting community. 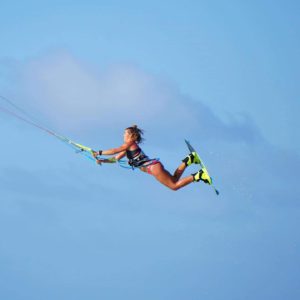 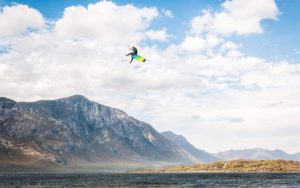 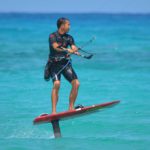 Has taken kiteboarding into a new dimension! Foil boards are slightly bigger than a twin-tip and smaller than a wave board, but under the board is a long fin or post with a horizontal wing, the hydrofoil.

Once sufficient forward speed is gained, the foil creates lift, very much like an aircraft wing and the board rises out of the water so that the rider is almost riding on air.

A great benefit of foiling is the greatly reduced drag, as the only things in contact with the water are the foil and very thin, aerodynamic post.

Foiling is a relatively recent innovation and suited more to advanced kiters, but when mastered allows the rider to achieve faster speeds in lighter winds, and is a completely different experience.

Where and How to Start Kiteboarding

So, if you knew nothing about kiteboarding before, apart from maybe keen curiosity, hopefully I’ve given you enough to be interested in having a go!

But where to start, and how?

DON’T be tempted to just go and buy some kit and teach yourself!

Firstly, kitesurfing for beginners is a very steep learning curve, once you master the basics, you can progress very quickly.

But, the basics are extremely important to get right – there’s a lot going on – firstly you need to master flying and controlling a kite that has the power to pull you at speeds of 20-60 knots!

Secondly you need to know what to do if it goes wrong. Even the most experienced kiters can get into trouble – after all, you’re harnessing the powers of wind, water and speed, and all can be unpredictable at times.

Thirdly, once you’ve mastered the kite, you need to learn how to control and steer the board and go where you want, rather than just being dragged off downwind!

None of these points is meant to scare or put you off having a go. BUT unlike other watersports it is vital to get lessons from a qualified instructor, who will use suitable equipment and teach you how to be safe.

Kiting is a potentially dangerous sport, particularly in the hands of somebody not equipped with the basic skills and awareness of the risks.

You wouldn’t do a parachute jump without being trained first! The same is true of kiteboarding.

The great news is that there are plenty of qualified instructors around most kiting locations, and they will all offer introductory “taster” lessons so that you can find out, with their expert guidance, what it’s all about and if it’s for you. All the kit will be provided (apart from a willing student – that’s where you fit in).

And it’s surprising how in just 3 or 4  lessons a complete beginner can be making their first tentative runs backwards and forwards.

At that point you’ll probably be hooked, as I was, and want to buy your first set of gear and go out and practice your new found skills and emulate the guys and girls you’ll see blasting around and throwing amazing tricks.

A fantastic way to progress really quickly if your partner/family/wallet will allow, is to combine a beach holiday with kiting lessons in any of the great kiting holiday destinations.

A week or two getting out most days in perfect conditions is the perfect way to move from absolute beginner to competent kiteboarder, well on their way to years of kiteboarding enjoyment (and obsession).

So now you have a little insight into what kiteboarding’s about, where it came from and where it might take you (and me) in the future.

in other articles I’ll take you through the nitty gritty of the sport – how the different elements work, how to find the right kit for you, at the right price, some of the terminology (and oh we kiters love our terminology!), and where to go to get started.

I hope you found this helpful but love to get feedback. So please leave any comments or questions below or feel free to email me on adrian@kitemadworld.com.

See you at the beach!