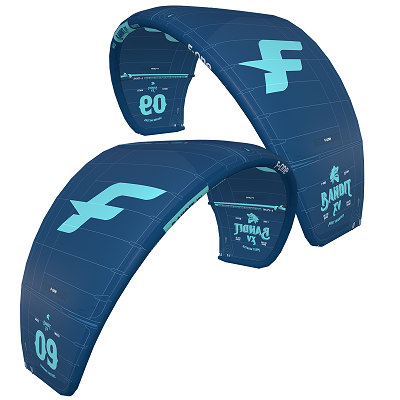 The F-One Bandit is an iconic kite that’s now in it’s 15th year. And we managed to get our hands on a demo so we could carry out this F-One Bandit XV review and look at how it sits as a kite for beginners.

The last 6 or so versions have all been good all-round kites that suit the ambitious beginner, and the XV is even more stable than its previous incarnations.

F-One was founded in France in 1994 by, then, champion windsurfer Raphael Salles, who still heads up the company. They moved into kite design in 2000 and have been at the forefront of kite development ever since. And the Bandit has had a loyal following since its launch in 2008.

Originally designed to give maximum wind-range with full de-power and ease of use across all free-ride and free-style disciplines it has delivered on its promises year after year.

The F-One Bandit XV is a delta C hybrid. In fact they patented the design and, although many of the variations on the hybrid C kites we see today have taken their initial lead from the Bandit, they still retain the patent.

Don’t be put off by the “C” kite reference with this kite though. Unlike a true C kite, the Bandit has a fairly low aspect ratio, so doesn’t give the rider the thrashing that un-bridled C kites do.

Instead, the Bandit has all the best bits of a C kite in terms of fast turning and looping ability, but combines it with the benefits of a bridled hybrid to give bags of de-power, wind range and all-round usability.

The kite has 3 struts, which gives it great stability even in the gustiest conditions and, with it’s steady power progression we’ve found the new Bandit XV to be even more stable at both ends of the wind-range.

The improvements each year have been subtle but in the new XV they are mainly around the trailing edge and a thinner leading edge strut. All of this makes the kite faster turning, allowing the rider to generate power at the low end of the range and to send the kite hard when it comes to jumps and transitions.

The F-One has always been known as kite with massive range, and the new version is even better at this.

As a beginner kite its predictability and instant de-power without the tendency to stall makes it a fun kite to progress on and you won’t outgrow it. It does steer fast, which soon becomes a benefit, but at the very early stages of learning you’ll need to be gentle with the steering input.

And the Delta C shape of the wing tips means that, on the water it easily rolls into the re-launch position, almost automatically.

As you progress, the Bandit XV will take you to whatever level you want with super direct feel at the bar making looping easy and sending the kite for jumps will wang you off the water, if you want that!

The canopy is constructed with Teijin rip-stop Dacron so durability is excellent, as we’ve come to expect from F-One.

It was nice to fly a Bandit again, the last time I flew one was V12, and the difference was noticeable, but the feel of the kite still brings a smile to my face!

F-One has a couple of bar options, but the one best suited to the Bandit is the standard Linx bar that comes in two sizes 38-45 cm and 45-52cm. All kites sizes from 8m upwards work with the smaller bar.

The mechanism for changing the bar size is straightforward with a pull-down tab under the float.

Everything on the bar is straightforward, with standard push-away QR and above the bar trim strap.

The de-power line in sheathed in PU to prevent friction and wear and there is a manual power line untwist swivel just above the QR to untwist the lines after a rotation or loop.

The bar comes with the ability to alter the “V” from high to low to suit different kites, a useful feature if you have different makes of kite in your quiver. The Bandit flies on the high “V” configuration.

The bar feels comfortable and grippy in the hands and does exactly what it should.

The F-One Bandit XV retains all the characteristics we’ve come to love about the Bandit and will see you through from beginner to advanced kiter without any problem.

It comes in at the higher range in cost of the kites we’ve featured here, but you’re getting what you pay for in terms of design and build quality. A plus is that the huge wind-range of the kite means you can get away with bigger size gaps in your quiver so may need less kites to keep you out in the full wind range.

We noticed you're visiting from Germany. We've updated our prices to Euro for your shopping convenience. Use Pound sterling instead. Dismiss