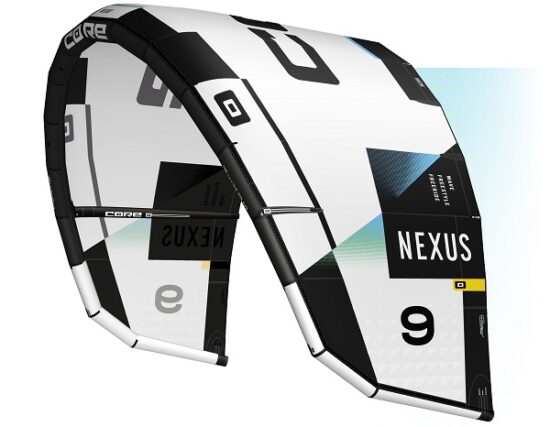 In our Core Nexus 3 Review, we look at the long awaited 3rd version of the massively popular Nexus series, what has changed, and is it still as good for beginners?

Core is a German brand and has been around since 2001, although it’s founder and CEO Bernie Hiss was playing around with kites on the water before the sport even took off properly.

Their designers have always been focused on performance and build quality and that’s reflected in the line-up of their kite range now.

People really started to notice them around the world when their XR range started hitting the world records for Big Air  with the current record of over 34 metres (114 feet) being held by Maarten Haeger using a Core XR7.

Whilst the XR7 is a great boosting kite and great for intermediates looking to boost their Woo scores or nail freestyle tricks, it isn’t ideal for beginners as it feels pretty hard on the arms after a long session.

The Nexus on the other hand is right in the middle of their range and was designed specifically as a 3 in 1 kite suitable for all disciplines. It would also suit you as your first kite as it has all the attributes you need ; easy re-launch, great wind range and stability.

I’ve personally been using a quiver of Nexus ‘s for the past 2 years and absolutely love them!

One Kite For All Styles

The beauty of the Nexus is that it really is 3 kites in 1.

By simply switching the pig-tail knots for the front-line bridles between 3 settings – “Wave”, “All-round” and “Freestyle”, the handling characteristics change so that the kite can be used for any style of kiting. 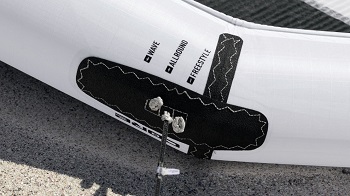 And it just takes a few seconds to undo a larkshead and switch it’s position at both sides – job done!

And that’s the reason I went for the Nexus. I mainly like to ride hard, boost jumps and a few simple rotations and kite loops.

But I’ve just taken my first steps to strapless riding with a skim-board and love it so much that a directional surf-board is on my buy list. And after that I’ve no doubt I’ll bite the bullet and start foiling.

So the Nexus allows me to do everything I want with one set of kites.

The Nexus 3 is a 3-strut kite with a profile that is biased to the new trend to “Modified C” shape. This gives it the turning speed of a C kite but with the forgiving nature of a hybrid.

The 3-strut design makes it lighter for a bigger wind-range but also gives it a faster turning speed to make it easy to loop and move around to generate power through any lulls or simply to whip across the sky for fast transitions.

But this doesn’t mean it feels twitchy or unpredictable. In the middle CIT (Core Intelligent Trim) setting at the bridle, the kite feels responsive yet stable and simply goes and sits wherever you place it.

And the bar pressure is enough that you always know where the kite is, without giving you tennis elbow after a couple of long, hard sessions.

Re-launch is never a problem either as the squarish wing tips allow the kite to sit nicely on its side after a crash, ready to relaunch with a tug on the bar.

Boosting airs with the Nexus is easy and great fun. The responsive feel of the kite means you don’t have to think too hard about steering it through the jump – a useful feature once you move from your first stages to learning new tricks.

The Nexus might not give you the simple send and boost character of the XR7 – you do need to get the timing a bit right – but the bigger wind range compensates for this in my opinion, as you can get out in bigger winds without feeling as though you’re being ripped off the board.

And the Nexus is not shy when it comes to hang-time and initial lift. People are regularly jumping over 20 metres with the Nexus – that’s enough for me!

Build-quality is among the best on the market. I’ve been riding my Nexus 2’s hard for 2 years and they all still look and feel as good as new.

The material was good on the Nexus 2, but feels even better on the 3.

The canopy material is now Core Tex 2, which has already been used and proven on the XR7. The material is stiffer and more tear resistant, which improves even further its stability in the air, but also re-sale value.

The Leading edge is constructed in a new material, Exo Tex 2, which, again is stiffer but also 80% more tear resistant than the material previously used. 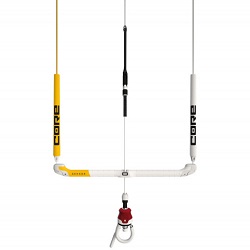 Core’s newest bar and lines offering is the Sensor 3 or Sensor 3 Pro. The original Sensor 2 S bars are still available at about £100 less, but these featured a slightly odd twist mechanism for the Quick Release. I have used the Sensor 2 and fired the QR without any problem – it’s a great bar. But for a beginner, the more standard push-away QR on the Sensor 3 is more intuitive.

All the bars feature a click-in QR, which makes it simple to re-set the chicken loop after a release.

The Sensor 3 is made strong, with a titanium core, and feels light and comfortable. It’s packed with simple yet effective features such as auto-untwist to automatically untwist the front lines after a loop or rotation, pop out winding arms, and plastic coating on the center lines where they pass through the bar. This makes the movement friction free and comfortable when you’re holding the bar next to the lines.

The Sensor 3 Pro is about £100 more and features more carbon in the bar to make it lighter, stronger lines throughout (although there’s nothing wrong with the standard lines), and ceramic bearings in the auto-untwist.

Both bars are easily adjustable from 46.5cms to 50cms and will suit any kite in the range.

In summary, the Nexus would see you easily through your learning stages and after that will allow you to progress to any discipline you choose. And if, like me, you want to do a bit of everything then this kite sets a new standard.

Core is at the higher range in terms of cost, but you really are getting what you pay for – the kites should last a long time, which will save you money in the long-run.

We noticed you're visiting from Germany. We've updated our prices to Euro for your shopping convenience. Use Pound sterling instead. Dismiss